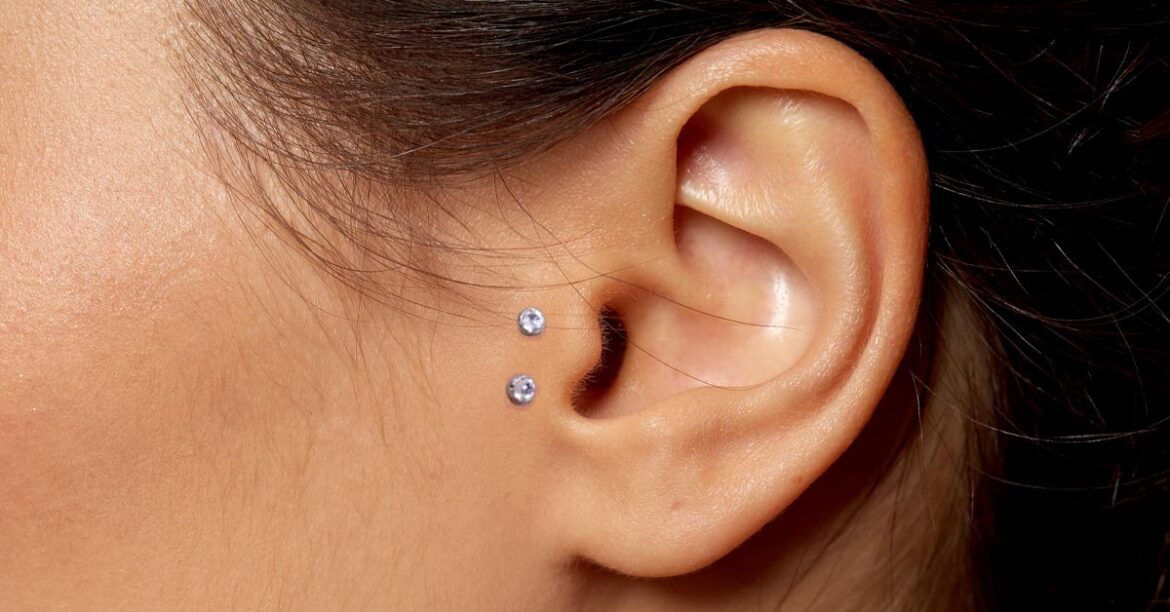 What is Double Tragus Piercing?

Double tragus piercing is a type of ear piercing that involves two piercings in the tragus,
which is the small piece of cartilage that protrudes in front of the ear canal.
This type of piercing can be done horizontally or vertically,
and is usually adorned with small rings or studs.

Despite its intricate appearance, double tragus piercing is actually a relatively simple procedure that can be done quickly and easily by a professional piercer.
In most cases, the entire process takes less than 30 minutes to complete.

What is the Pain Level of Double Tragus Piercing?

As with any type of body modification,
there is always some level of discomfort associated with the procedure.
However, dt. piercing is generally considered to be a relatively low-pain piercing,
thanks in part to the fact that
the tragus itself has very little nerve endings.

What are the Risks and Complications of Double Tragus Piercing?

Like any type of body modification,
there are always some risks and potential complications associated with double tragus piercing.

One of the most common complications associated with any type of piercing is infection.
This can usually be avoided by making sure that the piercing is done in a clean and sterile environment,
and by keeping the area clean and free of bacteria.

Another potential complication is rejection,
which occurs when the body tries to push the foreign object (in this case, the
jewelry) out of the skin.
This is more likely to occur in people with thicker cartilage, such as the tragus.

Some people may also experience allergic reactions to the metal in the jewelry,
which can cause itching, redness, and swelling.

Keloids are a type of scar tissue that can form around piercings, and are more common in people with darker skin.
They can usually be treated with over-the-counter creams or, in more severe cases, surgery.
While the risks and complications associated with double tragus piercing are relatively rare, it’s important to be aware of
them before you decide to go through with the procedure.

What is the Procedure for Double Tragus Piercing?

The actual procedure is relatively simple.
First, the piercer will clean the area with a disinfectant solution to help prevent infection.
Next, they will mark the spot where the piercing will be done with a pen or marker.
Once the location has been determined, the piercer will insert a hollow needle through the tragus.
A small piece of jewelry, such as a barbell or stud, will then be inserted through the needle and into the piercing.
The needle will be removed, and the ends of the jewelry will be tightened.
Finally, the piercer will clean the area again and apply a bandage or other type of protective covering.

What is the Healing Time & Aftercare?

The healing time is typically around 4-6 weeks,
though it can vary depending on the individual.
It’s important to clean the area regularly during this time to help prevent infection.
Some people may also experience some swelling,
bruising, or bleeding immediately after the procedure.
This is normal and will usually go away within a few days.
In the meantime, there are a few things you can do to help speed up the healing process:
1. Avoid touching or playing with the piercing
2. Keep the area clean by gently washing it with soap and water
3. Apply a cold compress to the area for 10-15 minutes several times a day
4. Avoid wearing tight clothing or headwear that could irritate the piercing
5. Avoid using makeup, lotions, or perfumes near the piercing
6. Avoid swimming or soaking in tubs or hot tubs until the piercing heals.

What Type Of Jewelry Can Be Worn for Double Tragus Piercing?

The most common type of jewelry worn is a barbell,
which is a type of cylindrical bar with two balls or other decorative ends.
However, some people may also choose to wear a stud or other type of ring.

Yes, you can get it even if you already have an existing tragus piercing.
However, it’s important to note that the healing time for double tragus piercings may be slightly longer than for single
piercings, so you’ll need to be extra careful during the healing process.

Do I Need to Pierce My Ears Twice to Get a Double Tragus Piercing?

No.
In most cases, the piercer will be able to pierce both sides of the tragus with one needle.

The cost can vary depending on the piercer and the location,
but it’s typically around $50-$100.
Some piercers may also charge an additional fee for jewelry,
so be sure to ask about this before you get the procedure done.

Double tragus piercing is a type of ear piercing that involves piercing both sides of the tragus.
It’s a less common type of piercing than single tragus piercings,
but it can be just as stylish and unique.
The healing time is typically around 4-6 weeks,
though it can vary depending on the individual.
Some people may also experience some swelling,
bruising, or bleeding immediately after the procedure.